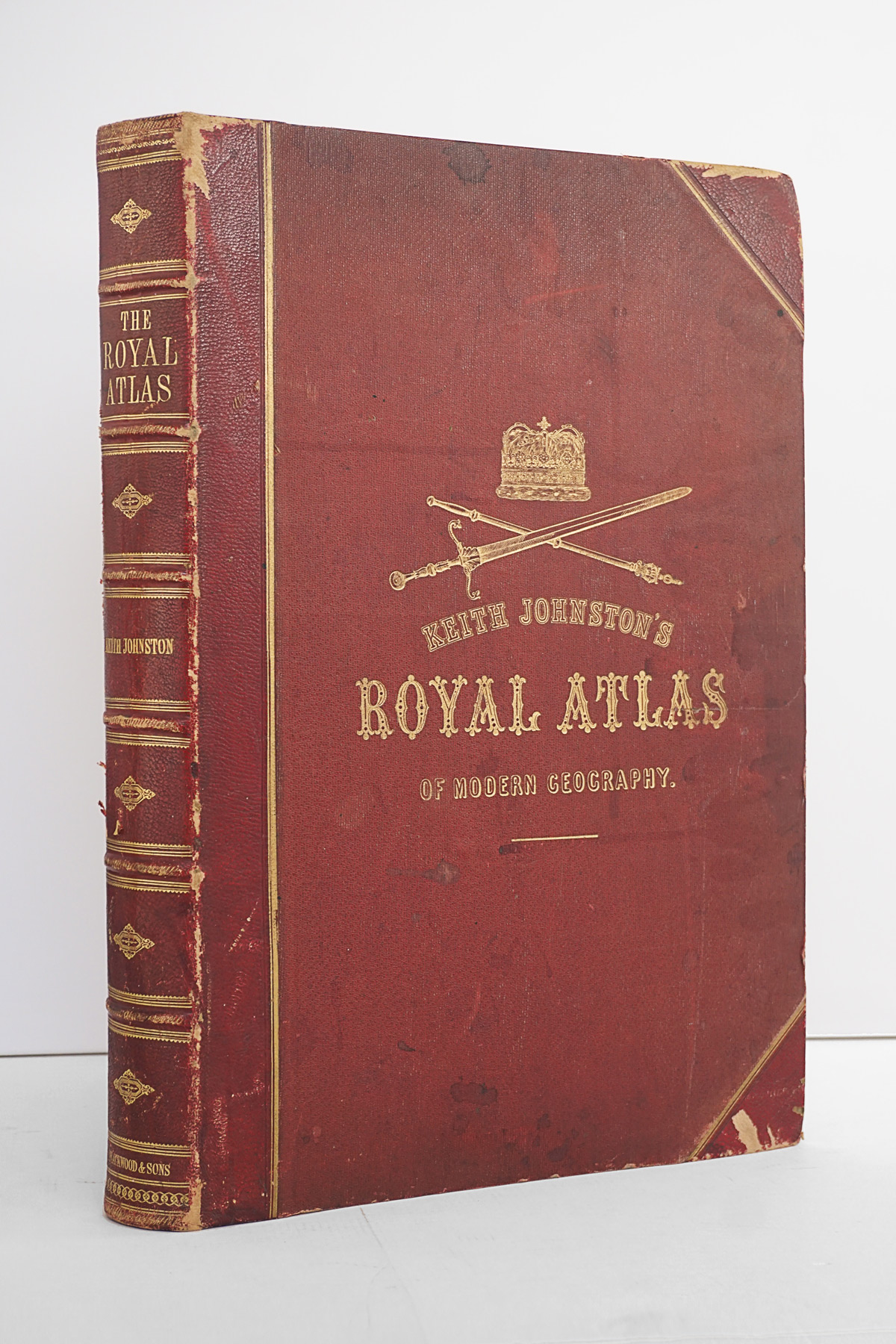 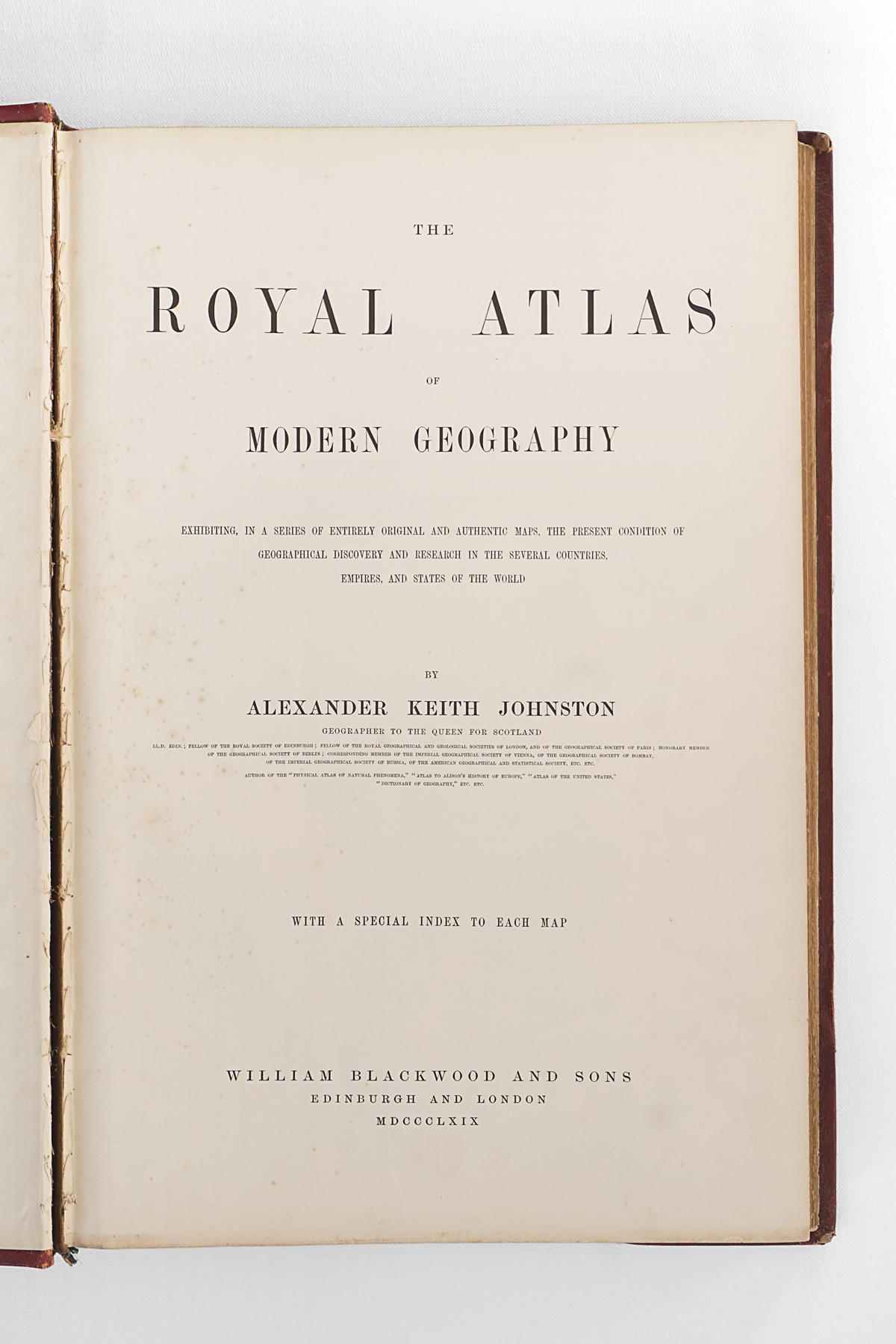 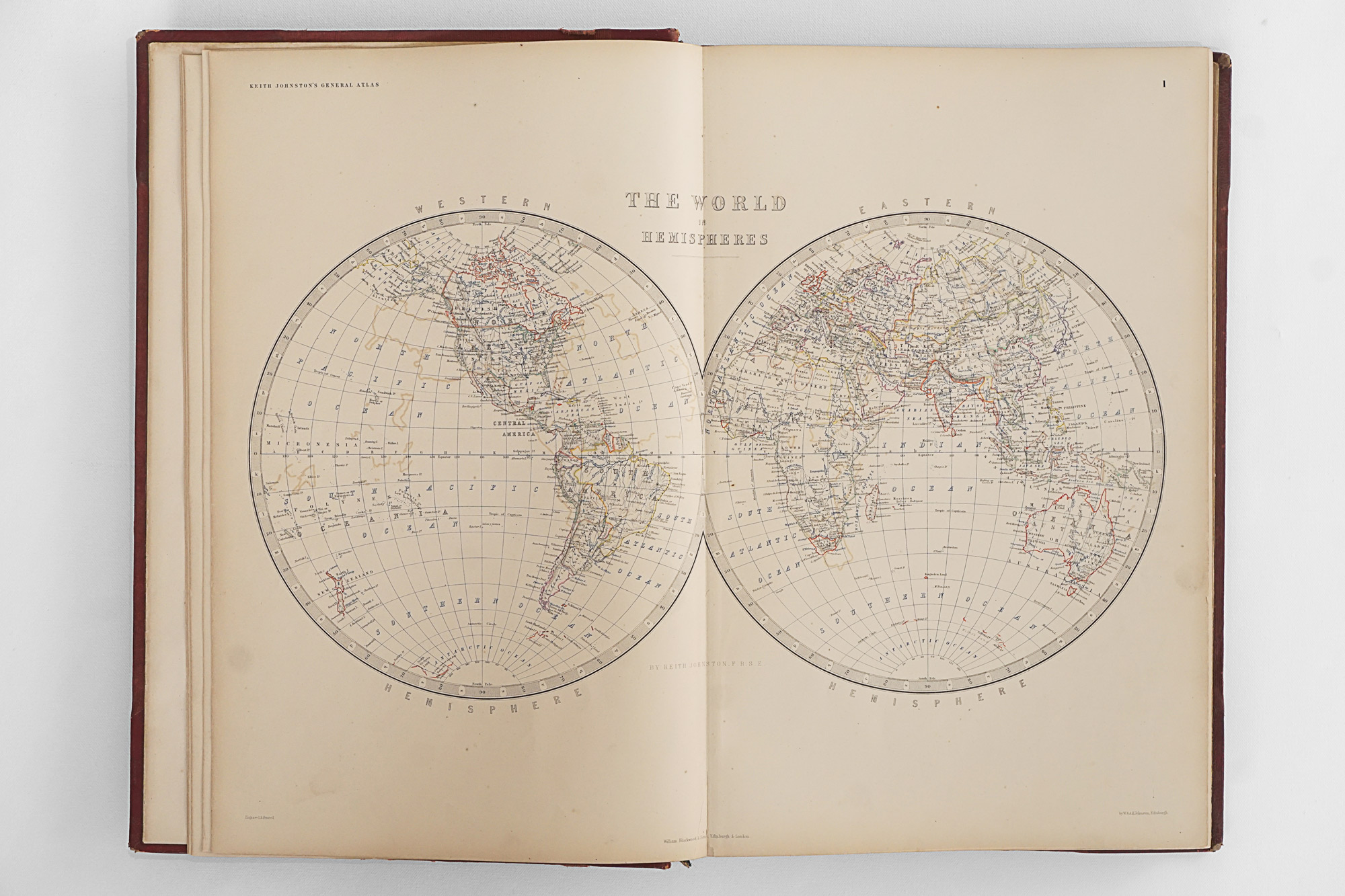 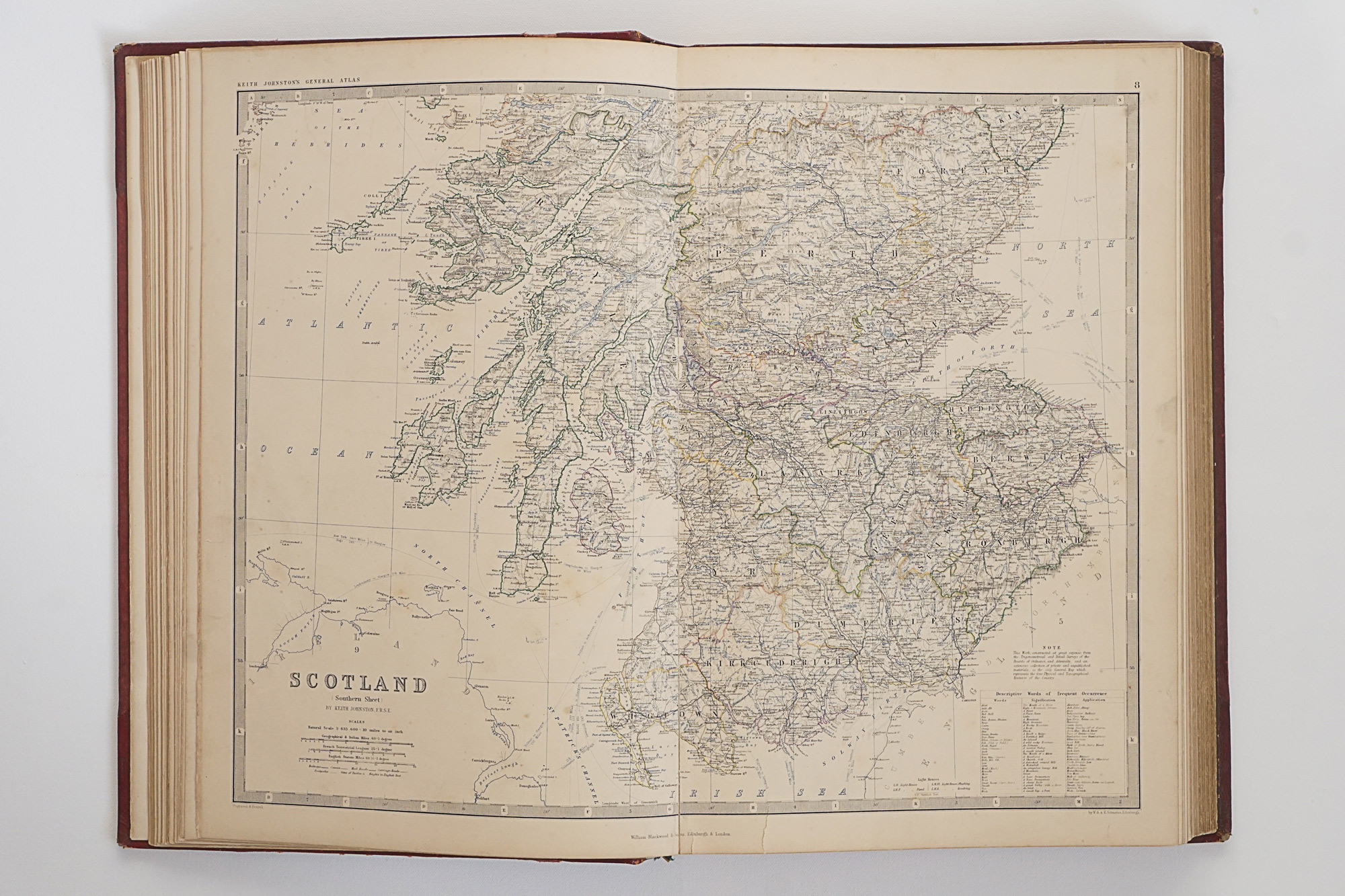 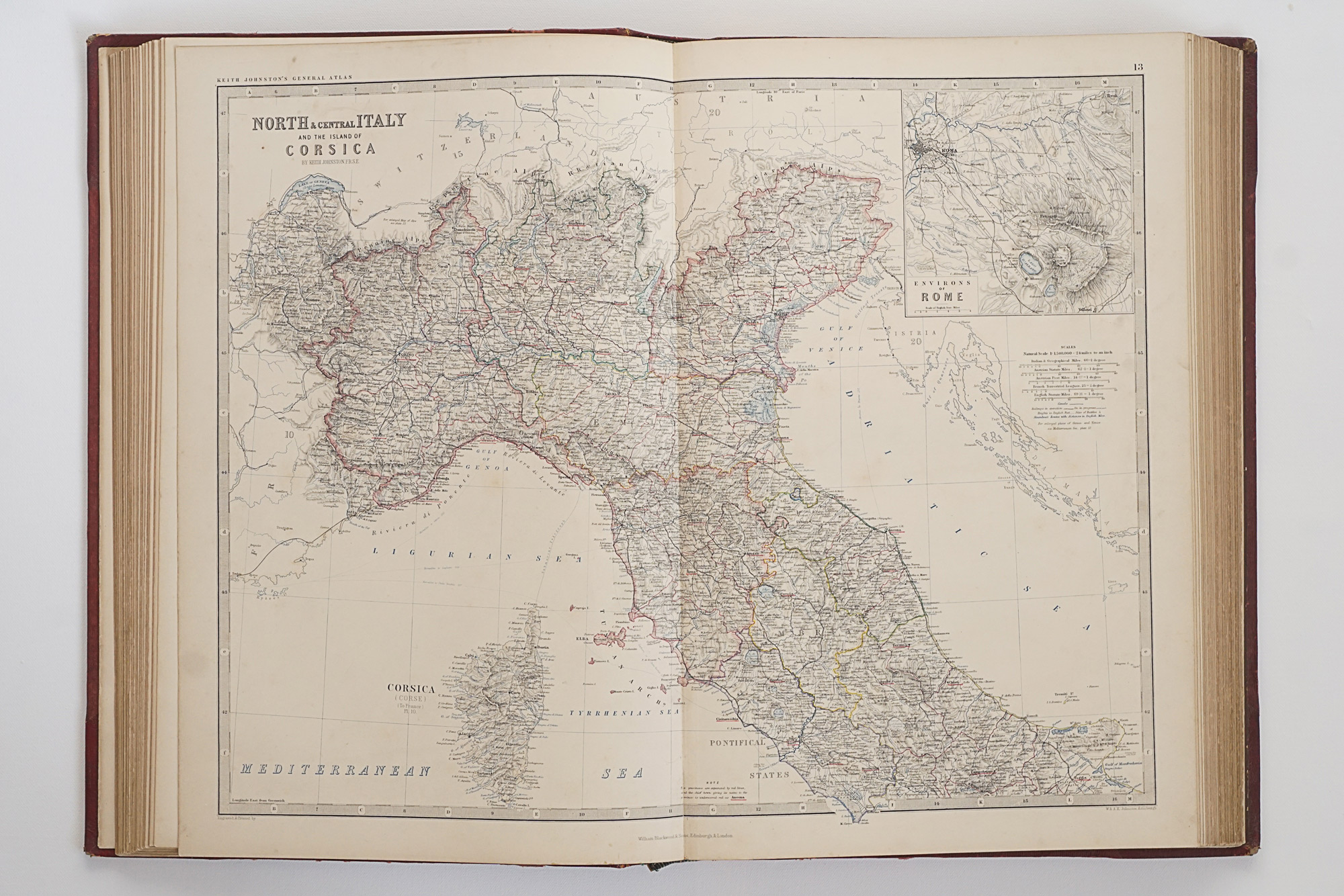 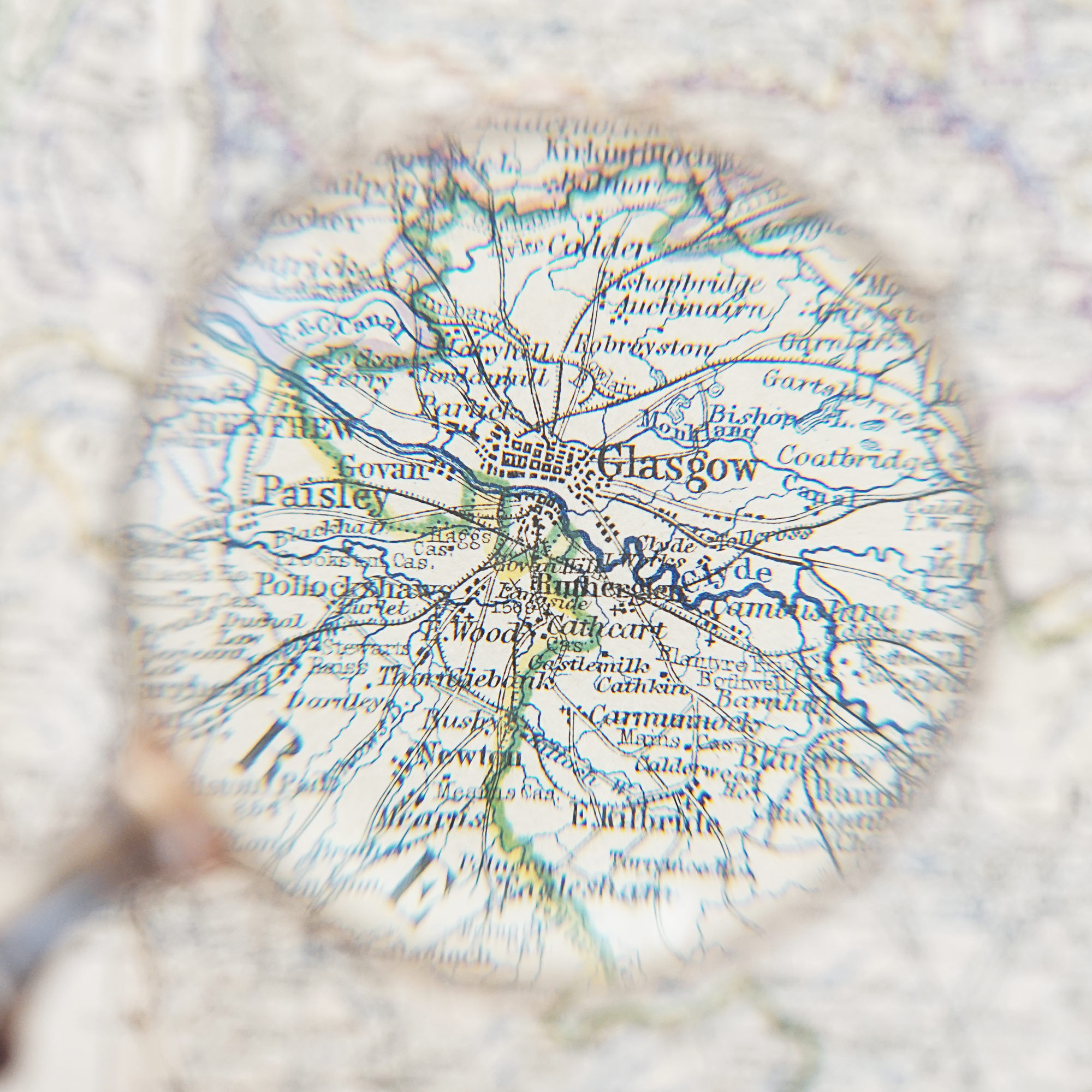 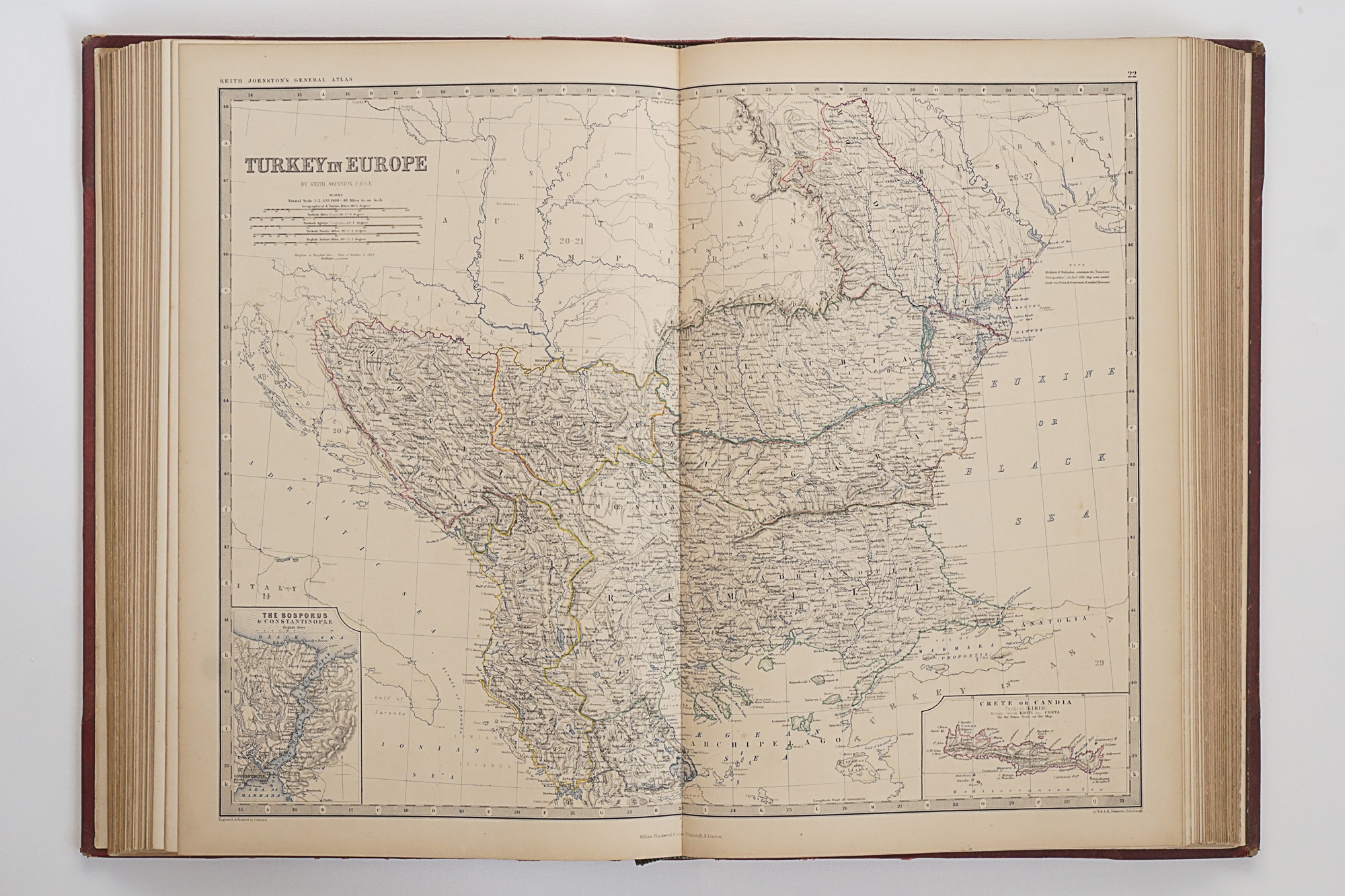 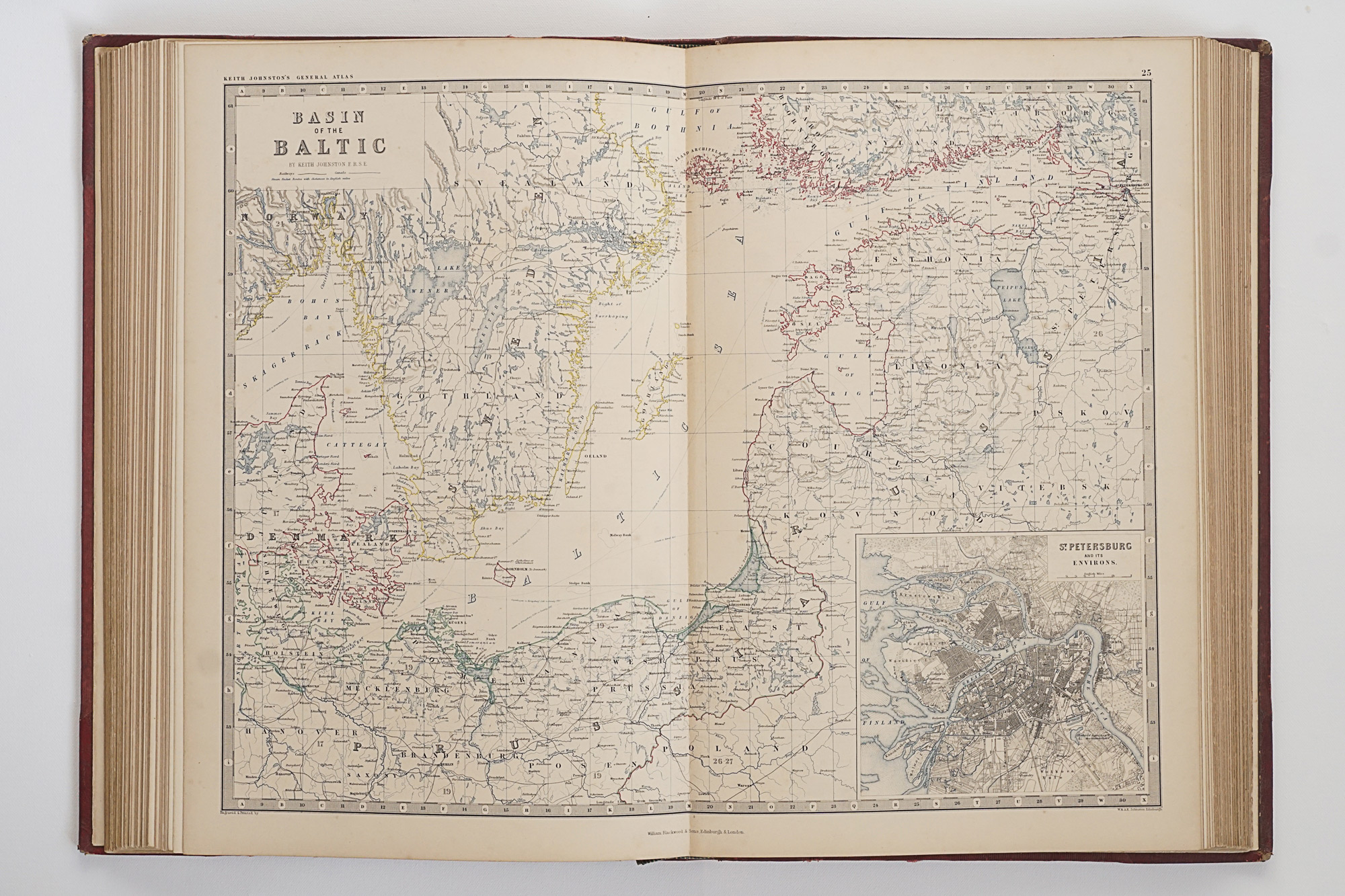 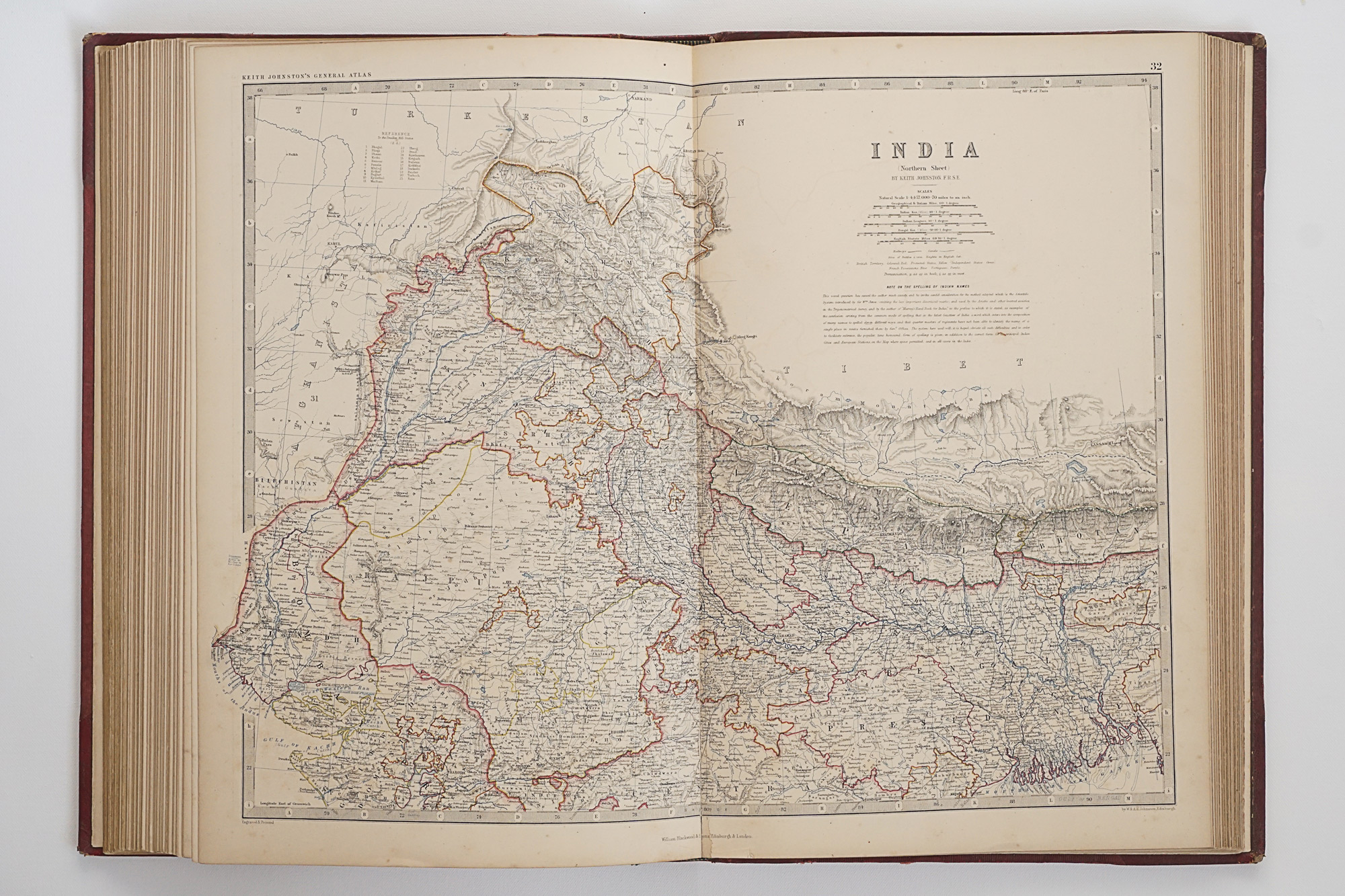 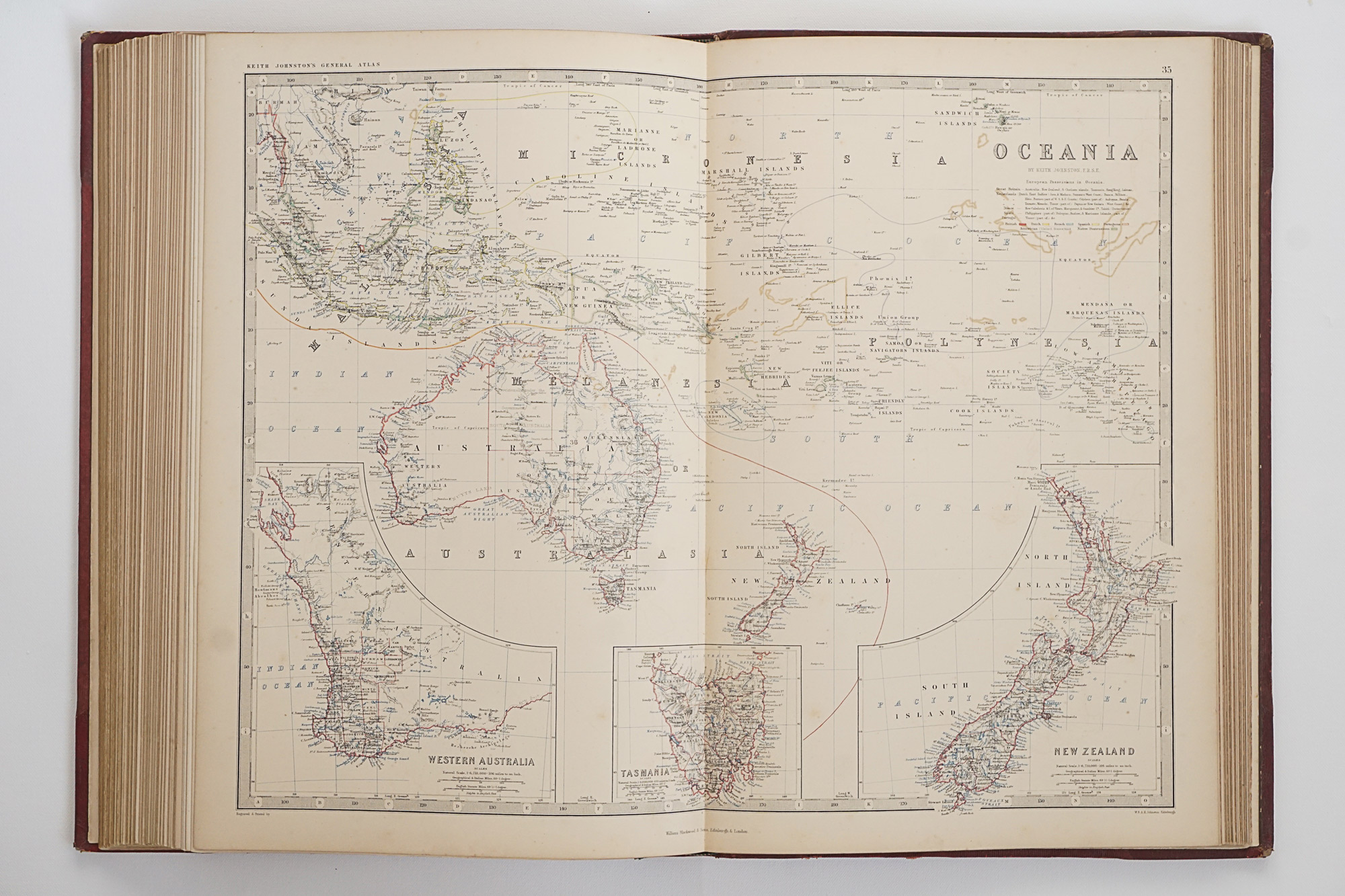 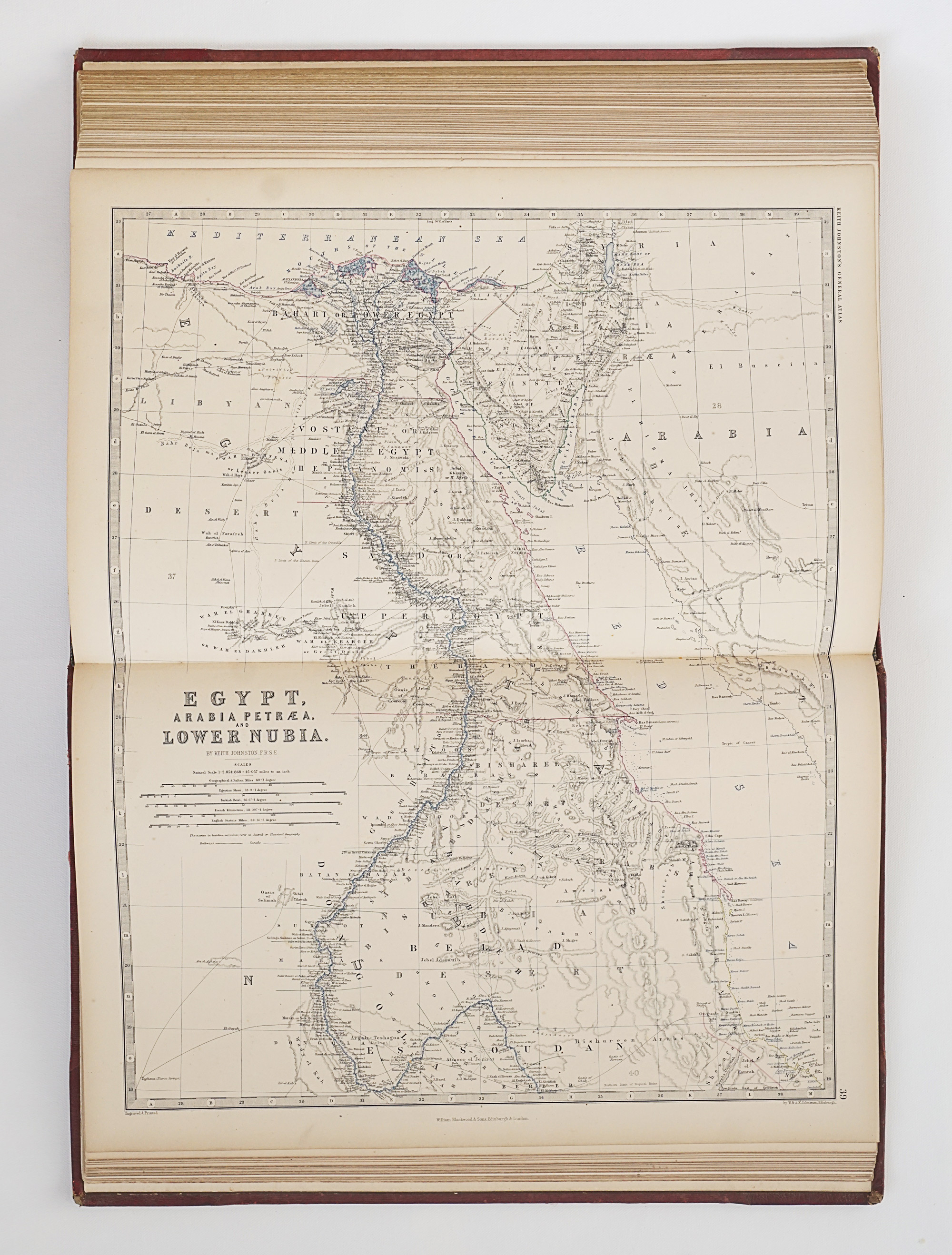 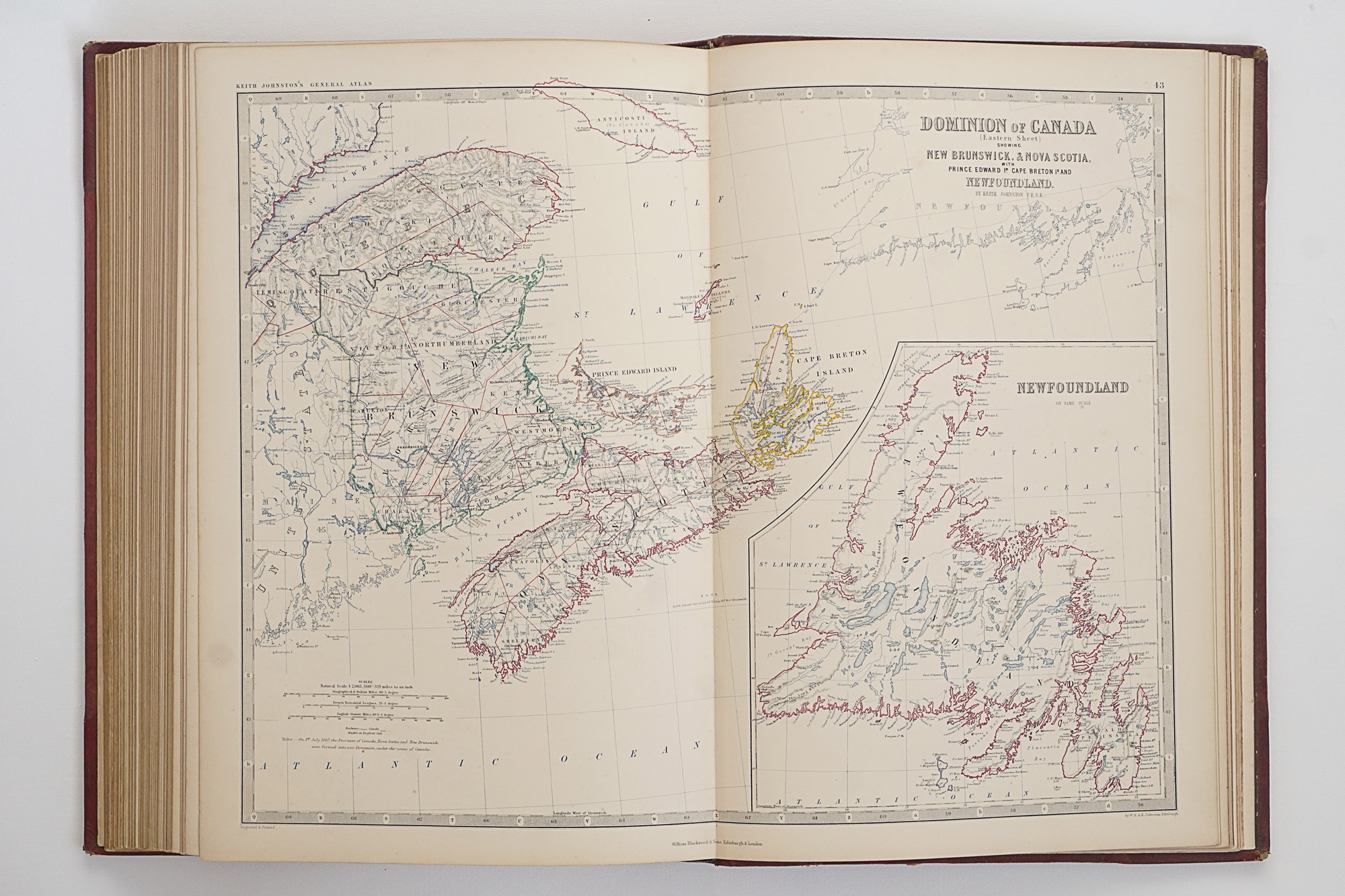 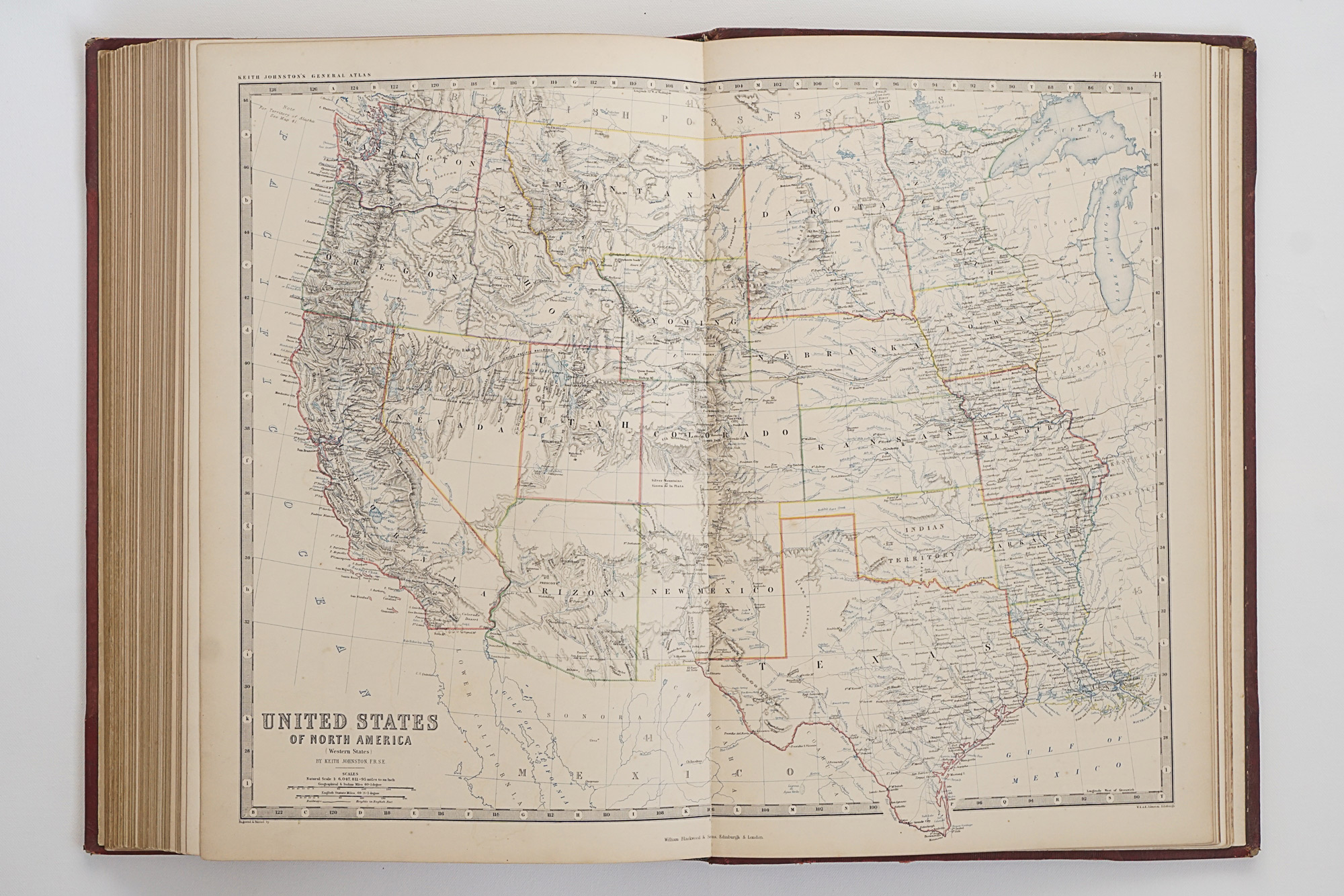 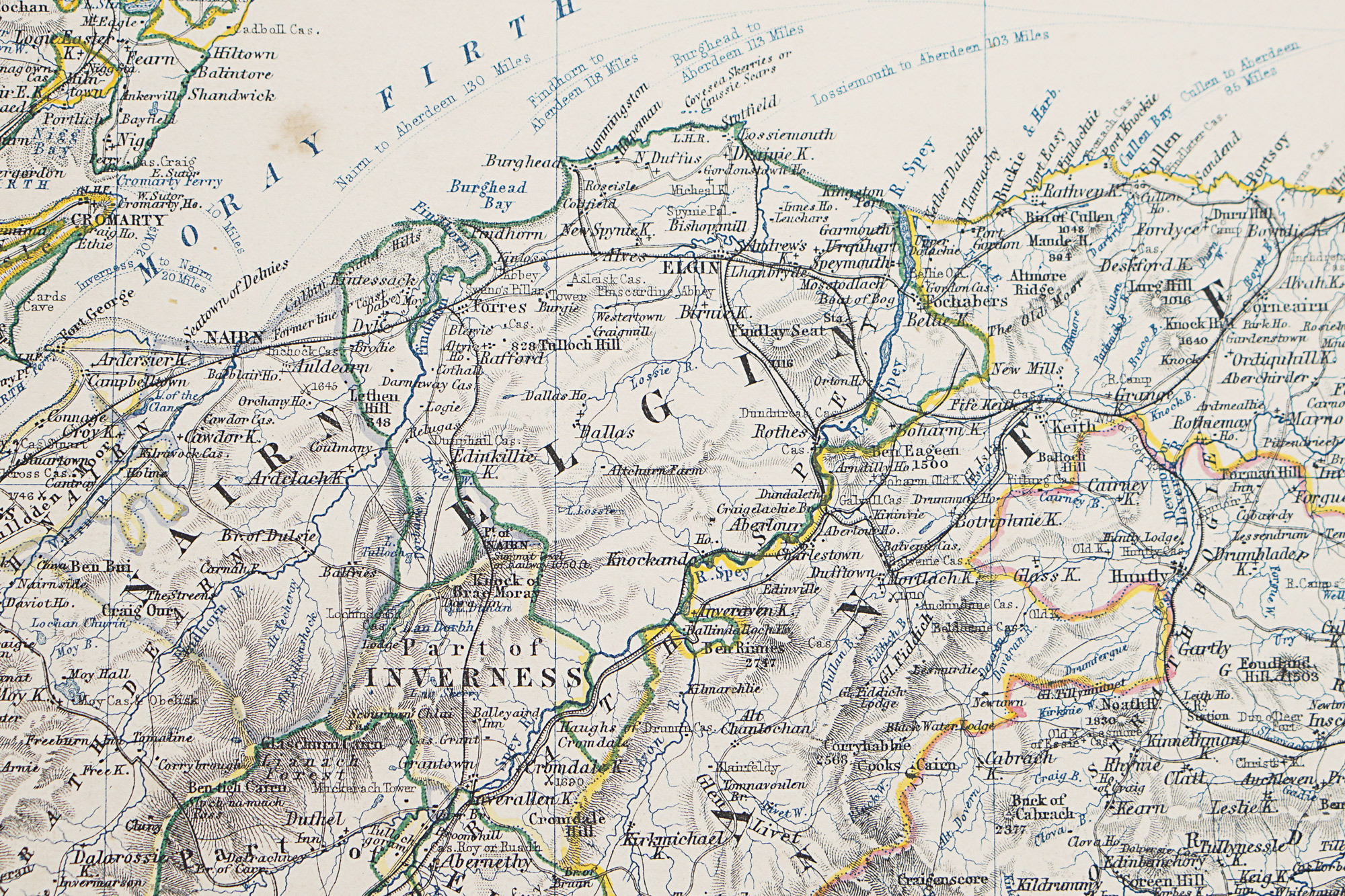 The Royal Atlas of Modern Geography: Exhibiting, in a series of entirely original and authentic maps, The present condition of geographical discovery and research in the several countries, empires, and states of the world

This is one of the best, most detailed and most prominent British atlases British from the second half of 19th century. The overall feel of the atlas is very luxurious. The cover boards are labeled with guilted letters and are quite robust and heavy, edges of the sheets are guilted to increase the attractiveness (although this was not entirely unusual for a British atlas), spine decorated with ornaments, this atlas was surely designed to make very premium impression on anyone putting a hand on it.

This atlas contains 48 large double page maps with borders coloured by hand. It is the later edition of Alexander Keith Johnston's most complex atlas work, published in 1861 for the first time. What is rather unusual about this atlas are mainly two things which can be immediately noticed: First thing is a little odd - all map have its own special index of names, making it very hard to find a certain place by its name if one is not sure on which map it was placed. This approach was later abandoned in the "Handy Royal Atlas of Modern Geography" (smaller, more concise version) published in the last decade of 19th century.

Second distinguished feature of this atlas is that the maps were printed using two colours: black and blue. Blue was reserved for showing all water-based features like rivers, lakes, coastlines, seas, ocean currents or mountain glaciers. This handy feature improved the overall legibility of the maps to a great extent, removing the uncertainty of what is a small river and what is a road, which is present in almost all older and even more modern atlases until the widespread of colour litography. In the end of 19th century. All maps are also coloured by hand along borders.

The terrain portrayal doesn't reach the visual depth of the work of german cartographers, on the other hand the maps manage to keep its very good legibility even in areas of higher altitudes, which often cannot be said about maps with more "plastic" looking terrain.

Besides usual maps there are 3 maps of sea areas (or "basins") which appear to be rather attractive and unusual. The map of North Atlantic Basin shows cross section of Atlantic bed, the arc of Great Circle between Valentia (Ireland) and New Foundland (Canada) and a cable of 1865-1866 marked with a dot where the cable was spliced. Many of the maps sheets also contain appealing insets with very detailed maps of major cities or important regions.

Externally good, with minor areas of leather scratched of the surface, mainly limited to spine edges and cover corners, moderate soiling of the cover corresponding with the age of the book. Front cover appears to be connected with the sheets block in only two out of six places, although it seems to be holding tight so far. All map sheets are without any signs of use. Around one third of the maps are slightly to moderately browned, very occasionally with small spots. In overall very good internally. Several maps of the UK land have been repaired.